Cap’n McNasty is lookin’ fer a crew, so if ya want to be a pirate, this is what ya do! This colorfully illustrated “guidebook” provides humorous instructions on how to be tough, work hard, have fun, and measure yer loot. Then one day, if ya set yer mind to it, you can be captain of yer very own ship, givin’ orders like him!

Cap’n McNasty’s Pirate Guide is available for pre-order. The book is due out on Oct. 5th. Order yours today and get a signed copy hot off the press!

Get your signed copy! 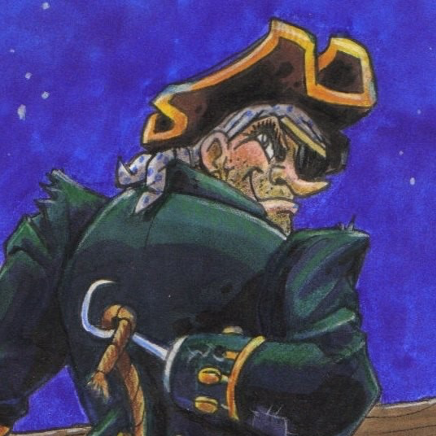 Height: 6’ 1”
Weight: A LOT.
Occupation: Yes, I’ve occupied a lot of ships – most of them not mine!
Favorite color: Gold, of course!
Hobbies:  I’d rather not say!

Cap’n Arnold Robert Ryan Rolf McNasty (or ARRR McNasty for short), was born under dubious circumstances in the Turks and Caicos Islands.  His father was rumored to be a pickpocket who fell in love with a woman he found picking his own pocket.  After stealing his heart – along with his watch – they were soon wed. For their honeymoon, they stowed away on a banana boat and six months later their premature and colicky child, ARRR McNasty, was born.  After the doctor snipped his mother’s umbilical cord, McNasty grabbed the scalpel and promptly relieved the doctor of his wallet.  The rest, as they say, is pirate history.  Cap’n McNasty has sailed around the world on his beloved pirate ship The Knotty List, along with his crew of mischievous malcontents. Their adventures are many – and their stories sometimes true! If ya like laughin’, learnin’, and lookin’ fer loot, grab yer sea chest and hop aboard, mate!

Mike grew up in Dedham, MA, and attended Bishop’s University in Quebec, as well as the University of Massachusetts in Amherst. Lewis was playwright-in-residence at the Los Feliz Playhouse in Los Angeles and had a number of works produced and favorably reviewed by the Los Angeles Times, the LA Weekly, The Boston Globe, and others. He also wrote, produced, and acted in Getting Personal, an independent feature film that has aired on Showtime, Cinemax, and the Lifetime Channel.

“The rhymed narration is full of gusto! Jaskiel’s rowdy cartoons feature comical pirate caricatures and over-the-top action…which will leave kids snickering!”
Publishers Weekly
“Perfect for the holiday season, here is a tall tale from the high seas! A favorite with my kids, the story is a perfect blend of all the things children want to see – I was happy to review it!”
Heidi Hauser GreenChildren’s Literature
“The text is concise and cleverly written in catchy rhyming verse, with beautiful and humorous illustrations by Stan Jaskiel, featuring brilliant colors and impressive detail. I love classic stories, but I can also appreciate truly new creative ideas too, and this one has a very funny surprise ending!”
Smart Books For Smart Kids
“It’s up to St. Nick himself to beat Cap’n McNasty in a showdown of hooks against candy canes that will leave you laughing until the very end!”
Seven Mile TimeKids Picks 2014
“Humorous verse with hearty pirate illustrations…jolly times are guaranteed for children awaiting Christmas in reading “The Great Pirate Christmas Battle!”
The Midwest Review Children’s Bookwatch
Previous
Next